Taking design inspiration from the past

How embracing natural materials and traditional craftsmanship has created a striking new social space for Homerton.

The new Dining Hall has been designed to blend in harmoniously with the existing landscape and the College’s architecturally significant buildings. This has in part been achieved by the selection of a historic ceramic façade, which complements the materials used on the neighbouring buildings.

Edmund Fowles of Architect Feilden Fowles tells us about the history of ‘faience’, the ceramic tiles that form the exterior of the building and how the design practice embraced traditional handcraftsmanship.

The new Dining Hall is situated within an important architectural cannon at Homerton College. Following the Victorian Gothic Revival style of the Cavendish College buildings and the Arts and Crafts of the Ibberson Building, it is a marker of today’s architectural thinking.

The building celebrates the integrity and inherent beauty of materials and craftsmanship, where ornamentation is a product of the natural beauty and imperfection of hand craftsmanship. It also embraces new methods of construction and engineering technologies of today; an Arts and Crafts building of the 21st Century.

Drawing upon this tradition, the Dining Hall is announced by a distinctive veil of green faience, a traditional form of handcrafted ceramic tile. The colour and texture have been carefully selected to complement the College’s existing natural material palette, consisting largely of red brick, with sandstone details, and moments of embellishment such as the lead and green oxidised copper Flèche crowning the Great Hall. 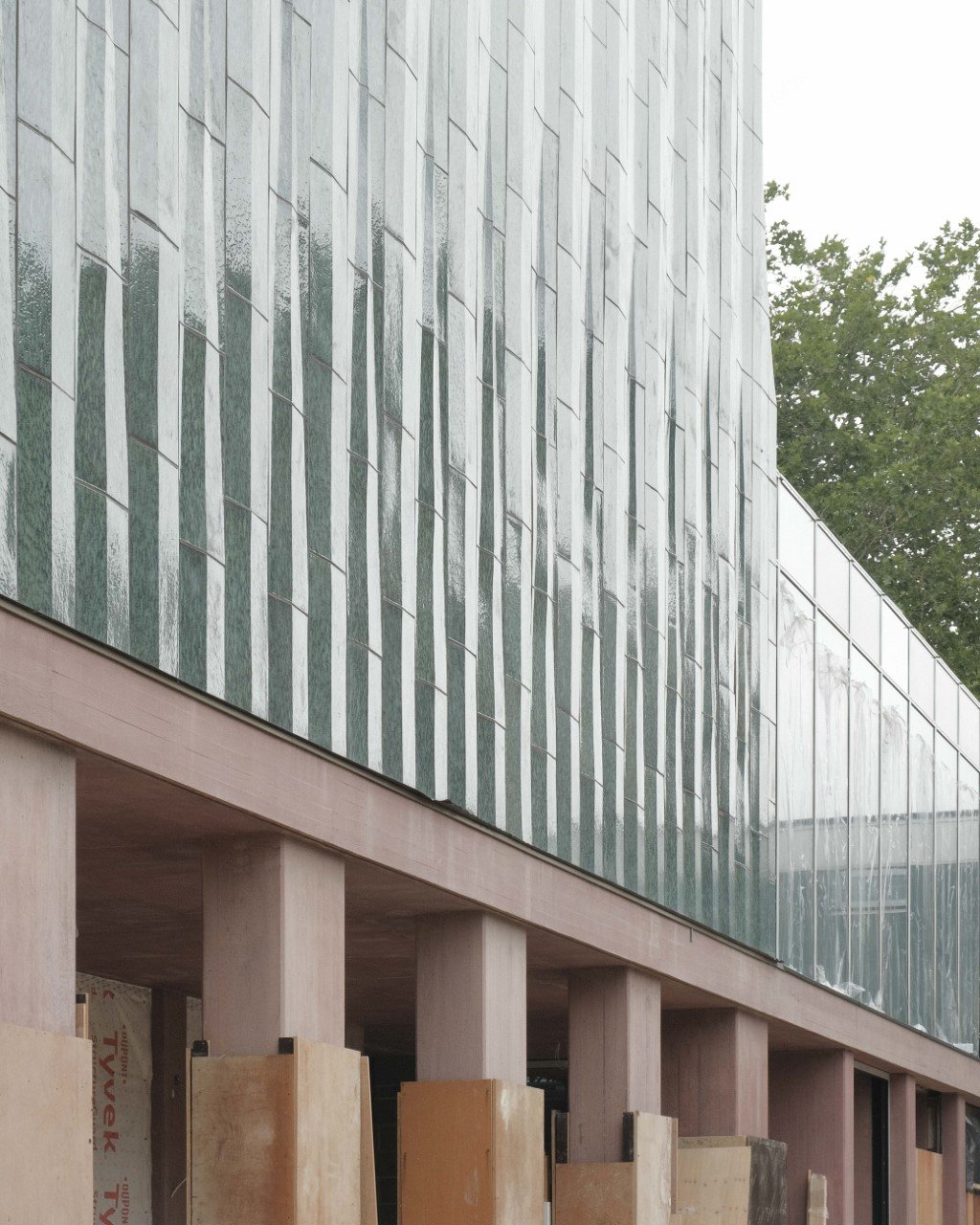 Faience – a hardwearing solution from the past

Faience, originating in Italy was an extremely popular material in the UK from the 1860s and adorns many Victorian public buildings, perhaps most notably the Natural History Museum in South Kensington as well as many distinctive London tube stations.

Using faience, the designer was no longer limited to the small clay units of brickwork or the heavyweight craft of the stonemason, but able to employ the skills of both sculptor and ceramicist. This, alongside the emergence of the steel frame, formulated a new construction method and faience became popular as a hardwearing pollution repellent cladding system.

This ability to sculpt and mould the material was an important quality in its selection for the Dining Hall, enabling certain motifs from the College to be subtly imprinted in the relief of the faience, and echoing the impressive depth, relief and buttressing of the gothic style Great Hall.

The faience enables us to achieve geometric complexity, detail and craftsmanship via a series of lightweight, hardwearing units, providing a beautifully crafted, animated and soaring elevation to the Homerton grounds.

We were excited by the opportunity to combine these ancient techniques with the innovative and modern opportunities created by digital modelling and fabrication tools to create something beautiful, distinctive and long-lasting for the College.

Feilden Fowles worked closely alongside Darwen Terracotta, one of the few architectural ceramics fabricators remaining in the UK. With their knowledge and assistance, a range of variables were explored with the College as well as glaze tests to develop and hone the final appearance.

To construct the units, clay pellets are mixed with water to form a liquid clay (or slip), which is poured into plaster moulds constructed from handmade or digitally fabricated ‘positives’ of each shape.

The moulds can be reused several times before the definition is lost. Typically, the clay is left to dry in the mould for two days before being removed. Further natural and mechanical drying then take place beforehand finishing the units, applying the glaze (faience) and firing.

Colour, finish and technical performance can be altered depending on the mix of the glaze used. Metal oxides are included to vary the texture and colour of the outcome. Initially, the clay components are sprayed with the first coat of engobe which acts as an undercoat before the topcoat, a speckle of titanium oxide, the final colour of which only becomes apparent after firing.

Following the fabrication and firing of the ceramic units, some 3,200 individual units were delivered to the site and installed by stonework and restoration specialists, Szerelmey. The units are load-bearing and coursed along the façade on a bed of mortar, and tied back to a blockwork backing and the primary building structure via metal brackets.

The overall appearance is that of a subtly undulating surface that reflects the shifting sky and nearby mature trees creating a constantly animated and changeful play of light. 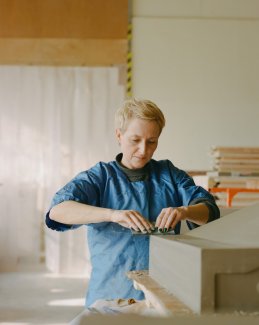 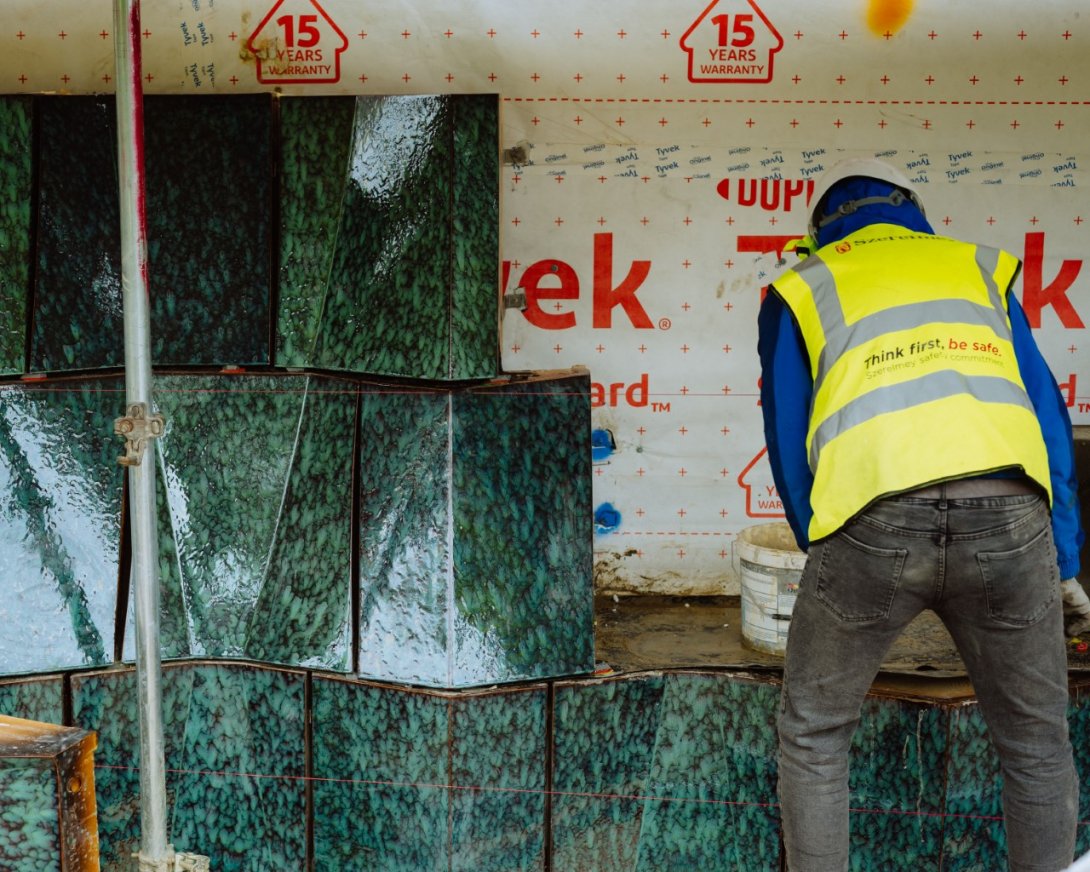 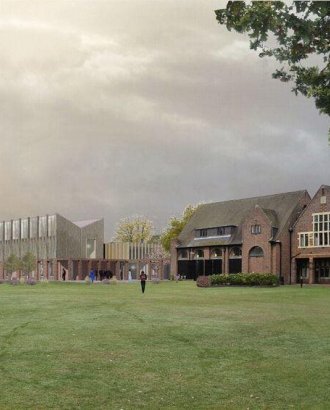